It began impulsively, with a simple request on Facebook – did anyone want to join a relay team for the Surfcoast Ultramarathon, a 100km monster of a race, to be held in Anglesea, Australia, on 22 September?

Did I mean it when I posted it?  I’m not sure.  I’d posted such messages before, looking for Adventure Race teams, but nothing had come of it.  I suppose that’s what I thought – I’d post the message, and nothing would come of it.

Instead, within about three days, we’d formed Team Inspiration. 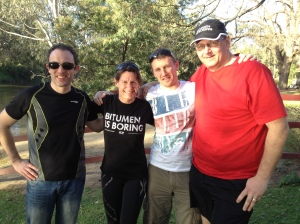 None of us had ever run as far as we’d planned on running.  We’d certainly never run as a team; we’d only just met.  And yet, we were going to do this.  I fluctuated between terror and exhilaration, my training runs growing longer, my body growing tired but hopefully stronger.

Time does strange things when you are pursuing a goal – it slowed, then raced, and then suddenly, there I was at the start.  It was 8 am.  All around me were fit people in Camelbaks.  I didn’t have time to feel out of place – before I knew it, we were running beneath the Rapid Ascent flags, off down the beach.

I don’t want to tell you the details of the race course, the footsteps I followed.  You can read that anywhere.  What matters to me is how it felt, the moments that will never be forgotten.

Running down the beach, I began too fast, and found I couldn’t catch my breath.  It was as if I had asthma, I couldn’t get the breath deep into my lungs.  Knowing myself, I kept that same pace, chasing others, running the first five kilometres along the sand.  The cold shock of crossing a tidal river woke me up, and I finally let myself drop back to my pace.

The moment I became present – that I began breathing again –  is etched in my mind.  The sun was to my right, glaring on the sand, reflecting into my eyes.  I put my sunnies on.  Runners stretched along the beach in a long, straight line.  It was misty, hard to see them.  We looked like the military, with our backpacks and serious expressions, just run-run-running as fast as we could.  The cliffs were high above me, and I kept slowing down to gape at them, open-mouthed, could it really be me here, running along this beach?

I knew the course, knew where to expect the challenges.  So I was expecting pain early on in the soft sand sections.  To my joy, they were nothing like the soft sand I’d been training on at Rickett’s Point; this was easy, compared to that.  I kept waiting for it to get harder, but it didn’t.  I found myself smiling, breathing more easily.  A water stop up a set of stairs – my family and teammates waiting with high-fives and cameras – what pleasure to find them there – and then onto a too-steep hill to find our way back to the beach.

On the coastal rocks

I was expecting pain from the coastal rocks section, remembering how hard those rocks had been during my Hong Kong adventure races.  Imagine my delight when it was short, when I could step between rocks to stable sand, when the terror was not as great as I’d planned for.  Still, I gave the rocks and reefs great respect; I know what a sprained ankle can be like many kilometres from home.

It wasn’t long after this that a man caught up to me – “How many kilometres have you gone?” he asked.  I checked my Garmin.  “13.2 – about the same as you, I expect.”  Turned out he didn’t have a Garmin and just wanted to know how far we’d gone. We ran together for a few minutes, small talk about the beauty of the race, about how we felt, then a “have a great race” and he was gone.  Encounters like that were rare in this race, which was unusual in the trail running I’d done.  I think we all were working too hard to speak.

Later, we climbed a steep set of rocks, and once I’d reached the top, the other runners had gone.  I chose my course down, frightened but finding courage from the doing of this, jumped the last four feet to the sand, coaching myself to land well and preserve my knees.

From here, I finally hit the zone.  My pack felt light, my body strong.  I was doing this, this thing I really didn’t know I could do, I was really going to make it.  Ankle-twisting pebbles the size of fists made me pay close attention, the sea washed over my runners, cooling me beyond measure.  And my two powergels gave my feet a spring.  I pretended to myself the race was 22 instead of 21 kilometres, playing a racers trick, trying to finish strongly.  I watched the surf break at Bells Beach, surfers out already, as I ran along the reef I’d read about.

Big seas at the Surfcoast Century

At the end, I climbed a final ramp to meet my family and the other three members of Team Inspiration.  I had done it.  My first half-marathon-distance race, along the beaches and coastal rocks of Australia.

I have much more to tell you about Team Inspiration and the rest of the 100km race.  This is just my first installment.  Suffice it to say, for now, that we all finished.  There was pain, courage, darkness and light.  My leg was only the beginning of an amazing journey for our team.  I am writing the full story for Trail Runner Magazine, to come out later this year.  But I promise I’ll give you a sample soon.

Thank you to Rapid Ascent and the members of Team Inspiration – together, you have changed me.

9 thoughts on “Experience of a lifetime: my first ultramarathon completed!”