I have been silent, but I have not been still.  School holidays always causes a long absence from my blog, but I’ve saved up some stories to share over the last ten days – sort of a “highlights of the trail”.  So here goes…

You might recall I’ve been training for the North Face 50km Race in Sydney’s Blue Mountains in May.  The last two weekends I’ve finally managed to break through a distance barrier, clocking up 30km on Good Friday, and 35km just yesterday.  The distances baffle my mind; to run that long seems insane, and yet, each moment varies so much – the emotions, the terrain, the sense of time passing – that while doing it, it seems normal.  I think partly it is the joy of the trail.  Having to be constantly aware of foot placement, of ascent and descent, of navigating and finding the right track.

But the last two weeks, there’s been an extra element.  I’ve run with groups of mainly men (and a few very fast women).  I’ve been the back-of-the-pack runner, the one that the others wait for at the top of the hills, and the bottom of steep descents.  Does this hurt my pride?  No.  It hurts my lungs, and my legs, and my butt, as I try to keep up with them.  Sometimes, during the course of the runs, it made me want to curse and swear and throw rocks at the group leader standing so calmly at the top of the hill, laughing and gesturing and not out of breath at all. 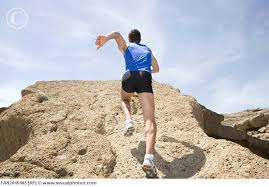 I envied (and seethed at) the look of his feet on the uphills, dancing away from me, making it look effortless.  But I loved him, and all of them, for waiting for me, for not making me feel less than them.  Emotions went all around, up and down, and back again.

The second run was with two men and me, and again, I was back of the pack.  They chatted, and I ran behind, and this was okay, because I was helping to navigate, and really, we were running so very far, that just getting there at all felt a tremendous accomplishment.

And now to the memorable moments – my two favorites anyway.

The first one was on Good Friday.  We were about 28km into the 30km run, and the leader decided on one more short-cut down this super-cool, narrow, single-track trail.  It was darker than most of the woods, moist, full of tree ferns, and it looked seldom used, like a secret trail.

This wasn’t the trail, but it looks like it!

Then one of our group (one who had kindly run with me at the back of the pack a few times) needed a rest stop.  He told me to go on ahead.  But I didn’t like the thought of leaving him.  He didn’t have a map; we didn’t know the route.  So I ran slowly, hanging back, trying to keep the last of the line of our group in sight, glancing over my shoulder to see if the other guy was behind me.  I turned down a mossy, steep staircase, and stopped.  I waited until he caught up, thinking this was a place he could easily go wrong.  We began running but the group had gone.  It was okay, there was only one track, and all was good, until we came to a four-way fork in the trail.  I stopped.  We had no idea which way to go.  We discussed what to do, and then I took out my phone and tried to call Ben, who was with the group.  No answer.  We shouted, loudly, and heard an answering woop woop, and then my mobile rang and it was Ben, who talked us down from the hill.  It was a heart-pounding, panic-inducing five minutes, but we found them, and continued on.  And I added another moment in my Journal of Memories of Scary Moments surmounted on trails.

The second highlight came yesterday, on a washed-out section of trail.  My husband called what the three of us did “dumb and irresponsible”, and then he admitted he would have done it too.  We climbed down over the broken section, scrambled across the stream, and pulled ourselves up the muddy bank on the other side.  One of the men reached down a large hand to help pull me up the slope, which I thought was very gallant.  The scramble was the highlight of the run for me, the moment where we broke through what we should be doing, and ventured into a bit of a risk, an unknown, an adventure.

Today, my headtorch for the North Face race arrived.

I ran around the playground in it, pondered life.  How ten years ago, I bought my first headtorch for an adventure race training weekend on Lamma Island, a small island a ferry ride away from Hong Kong island.

I had no idea who I would turn into then.  How different the course of my life was about to become.

This new headtorch, my second, seems to be shining a light forward, and it makes me wonder what the next ten years of adventure will bring.  Life is good and I am still growing.

Oh, and very hungry and a little bit tired!