He stood at the side of the trail, silently, beckoning me.  He was the first living thing I’d seen in over an hour.  I welcomed him.  The fog was thick, blanketing us together in this moment.  I stopped and stared.  “You want me to follow you, don’t you?” I asked quietly.  He stared back and didn’t say a word.  I glanced at the thin, overgrown trail behind him, leading up the mountainside.  It looked perilous; there might be snakes.  I was afraid.  But drawn.

Suddenly he turned and moved off, glancing behind him only once.  I remained still.  “But that would be insane, to follow you up there,” I murmured, still, taking a step forward, keeping him in sight.  “Insane.  But kind of fun too…”  My voice was wistful.

But by this time, he was gone, swallowed up by the bush as if he had never been there.  I was alone again.  This fog could hide all manner of things, me included.  I had noticed it from a distance, as I drove up to the mountain this morning, and was elated.  My olive-green mountain, topped with tendrils of cloud that extended halfway down its flanks; I would be sure to be enveloped in it when I climbed to the top.

When I’d arrived at the car park, there was not another car in sight.  It was raining slightly, and I stood under the back of my four-wheel drive’s rear door, trying not to get wet as I got my pack ready, and realized how silly that was, as I was going to be running in the rain for nearly three hours.  I stepped out from shelter and began.

Within moments, I’d seen two wild rabbits dart across the trail.  I smiled, greeting them.  I was not lonely.  I had been longing for this solitude.  Further on, a wallaby hopped quickly across the trail.  I was tired from a hard training week, but as I covered the trails, danced among rocks and roots, I felt the tiredness lifting, borne away by the woods.

I had contemplated changing routes today, as I thought running the same tracks was getting boring, but I couldn’t bear to miss any of my favorite sections, so went as usual.  This made navigating easy, and I could be fully in the moment.  Every one in a while, though, it occurred to me that I was all alone in these woods, and I glanced around, frightened, but soon forgot danger, and got lost once more in the footfalls and movement. 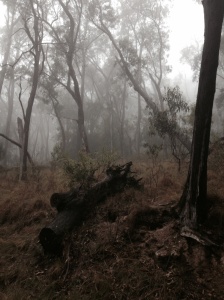 As I ascended, the fog grew thick.  Silence held me.  I could hear myself think in that silence.  I prayed the fog lasted, that it continued to hold me in its silence, a welcome relief from the chaos of home and young children.  I was almost at the top of the mountain when I saw the beckoning wallaby, the one who, like the rabbit in Alice in Wonderland, seemed to want me to follow him.  I could see myself doing it, that’s the strange thing, just for the adventure of it.  Because life in the suburbs can seem so dull and risk-free; because I like the edge.  I liked thinking about following him, and being led into some other strange world that had different rules and new challenges, that would require me to be, I don’t know, fuller, somehow.

I let him hop away though, and continued through the fog on my own.  And I contemplated it, how sometimes we just have to go through the fog, to not be able to see so clearly, and that too is okay, the fog is just another part of life.  The rain that came with it, I welcomed.  It felt elemental and real, and the clothing and shoes, and everything about me was perfectly suited to the rain.  I was glad it didn’t change the fog though. 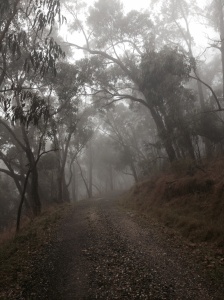 I had seen no people for an hour, when, out of the mist, I saw the outline of a vehicle, a work truck, parked to side of the trail.  No workers were visible and all was silent.  I’d noticed over the previous months that they were grooming the trails with large loads of dirt, gravel, and pebbles, and was not surprised to see a load of yellow dirt on the trail.  Except as I approached I realized it covered the entire trail and was six feet high.  I stared at this barrier, assessed ways around (there were none), contemplated turning back (no way!), and finally scrambled over the top of it, giggling to myself. It felt naughty and fun, and as if the wallaby would have been cheering for me.  I scrambled down, and continued on, where, about twenty feet away, was another six-foot-high pile, this time of gravel.  I slipped and slided my way up and down it, and fell in love with this wilderness, this wildness, all over again.

Traveling through the fog: it took time; it takes time.  It was the run of the wallabies that day – I counted seven or eight of them, and it seemed the longer I ran, the bolder they became.  They didn’t hop away, but kept eating at the undergrowth, just lifting their heads to see me.  I ran and ran, over the peak of that mountain, shrouded in white, and finally turned down its backside.

It happened as suddenly as the sun coming out from behind cloud; five feet of descent and the air was suddenly clear.  Twenty feet down, and color had returned to the world.  The greens were vibrant, shimmering in the sudden sunlight, damp with dew where cloud had touched them.  The track down was fast and steep, and I took small, quick steps, trusting my body to be agile and fast.  It was like coming back to life.  I wanted to run back up hill to do it all again, to relive the feeling of life returning.

Down at the bottom of the hill, back in the car park, all was clear and fine, as if none of my adventures or the fog had ever happened.  Indeed, when I arrived back in Bayside an hour or so later, the ground was dry, and my husband reported that it had not rained there.

I smiled, and held my adventure close to my heart.  How blessed I was for those hours on the mountaintop, in the fog and the rain, with the wild.