I’m careening downhill, and I can finally feel my feet again at the four kilometer mark of this winter half-marathon.  I’ve even managed to strip off my running gloves and stow them in my pack. I feel more agile than usual, and the sections that frightened me on this course last year seem tame and easy.  I let the playlist in my head stick on the Happy song, and enjoy the feeling of flying.

We’re 18.2 kilometers into the 21k course, and I’m sure my Garmin has stopped working.  How else to explain the fact that it doesn’t seem to be measuring the distance I am covering?  And I am covering it.  Like a worn-out snail.  On a hill.  A steep, single-track hill.

I’m one in a long line of other snails, colorful in running gear and water backpacks.  We plod upwards, breathing heavily, occasionally groaning.

It must be the cold/flu I’ve been battling, I tell myself, that’s what making this seem so endless.  My left calf is threatening to cramp because I’ve been training to run up hills rather than walk.  I tell myself firmly (again), no excuses, don’t let this cold be an excuse to be soft.

The person in front of me glances back with a look that says I am obviously insane, and steps graciously aside.  I plod up a bit faster, jogging where there is room, before falling into the snail line again.

A bit further on, a woman mutters under her breath, “Who are these crazy people running?”

I pass again, and I try to increase my pace beyond my slow plod to run, to be one of the crazies.  I engage my gluts, drive up, enjoy the sensation.  I steal a glance at my Garmin: 18.5 km.

No way!  It’s been ages since I last looked.  I try to do quick mental arithmetic to see how much is left of this race, but the .5 has my slow brain flummoxed.  I work it out.  About 3k left.  Yep.  Three.  One gel remains in my pack; I aim to ignore it because I want the Protein Revival at the finish line more.

It began, this big hill, last Wednesday.  That was when I caught the cold/flu my daughter brought home from school, the same day I had two back-to-back BodyPump classes to teach that evening.  I practiced for the classes as a large truck ran back and forth over my body, the world looking slightly askew.  Choreography wouldn’t stick in my head.  I turned the music extra-loud to hear the beat, as my ears weren’t functioning.  Later, I turned to my husband for advice:  “Should I get a fill-in for my classes tonight?  Do I seem sick enough for that?”  He said the equivalent of “don’t be soft”, so I wasn’t and I believe I taught those two classes.  It’s all a bit foggy now.

The next three days I took off exercise to cough, sneeze, make school lunches, and stand in drizzly soccer fields watching my son play in his under-10s team.  I guzzled Berroca like it was beer and slept with nighttime cold medicine.  By Saturday, my husband had contracted the man-flu version of the illness, and decided it would be smarter to stay at home with the kids than to drag them up to Olinda to cheer me on in the cold.

Me?  I decided if I was going to be sick anyway, I might as well be sick while running an amazing race.

“Nope,” said Kim, with her customary nonchalance (she’s the friend with whom I’ve done this whole series, driving off monthly to race, leaving with our husbands our 5 children, 3 dogs, and 2 cats).

“It’s meant to be just over there, about twenty meters away.”  I held my hand up to shade my eyes but could see nothing.  “Never mind, let’s just follow these people.”

To say the fog was thick would be an understatement.  It was as if there were nothing left in the world but us, and the line of people we followed into the mist; the rest of the world was only fog.  The air was frigid, and though we’d parked close according to the map, we could barely see our feet, let alone race headquarters.  We huddled in together for a photo, and I was hugely grateful for my down jacket, beanie, and gloves.  Not ideal running gear, but perfect for an early morning race start in the town of Olinda, at a high point in the Dandenong Ranges, in the midst of a long, cold winter. 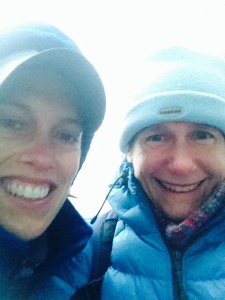 Where is race headquarters?

For years, I’ve held onto a race in Hong Kong as my Gold-Medal-standard of the coldest start ever.  It was an adventure race in Repulse Bay that began, mid-winter, with a jump off a pier into the sea.  Whenever I’m cold at a race start, I think of that, and decide it’s not as cold as that was.  That was ten years ago; nothing has even come close.

Until Olinda.  It was colder in Olinda. 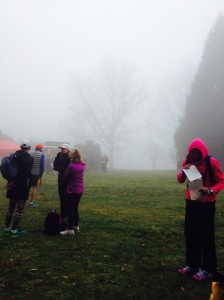 Through the fog, my friends from home appeared.  They were all running their first trail race, and I wondered if I should have suggested warmer clothing for the start.  We shivered briefly in each others presence, and then they fled to their car to rearrange race gear.  Kim and I made several trips to the porta-potties, as you do, and waited until the last possible minute to strip down to race gear

I love race starts on cold days.  The crowd of people generates, unconsciously, a delicious group heat.  While I battled to keep my Garmin from losing the satellite connection, I soaked up the warmth.  Still, I shivered freely, and when I tried to speak, I couldn’t form words.  I can’t recall the countdown, but somehow I pressed Start on my watch and ran across the starting line.

It was a long race, and I wasn’t worried about passing or being passed yet.  There were plenty of ankle-snapping holes in the grassy downhill, so I mainly focused on not stepping in them.

Ten minutes in, feeling had returned to my feet, and I had stripped off my running gloves.  That’s when “Happy” began playing in my head.  I was happy, just to have made it out onto this glorious course.  As we moved downhill, we ran out of the fog and the day cleared.  I found myself on a wide track, lined with autumn leaves.  I was home, and I felt more alive than I’d felt since the previous Tuesday.  Sick?  So what.  I was running in my favorite woods on earth.

I’d planned out gel, salt tablet, and drinks strategies.  But I was tiring early, so at the 5k mark, I was already sucking down my first gel, and feeling the welcome surge of energy it brought.  That helped me enjoy the downhill section by a fence, which had been on the way to the finish the year before.  I’d sprained my ankle four weeks prior to that event, and spent the race terrified of re-injury.  Then, this section has seemed very frightening, with lots of potential ankle-twisters.  Today, it felt easy and I was delighted by the progress I’d made.  I was gutted, though, when we turned onto Stoneyford Road.  In my mind, this was the way to the finish line with just a k or two to go.  That had been the course for the last two years.  This year, we were only 10k in!  Still, I love downhill on roads, and I leaned forward and flew.

The technical bit near Silvan was littered with logs to jump (for those tall and brave enough to jump); I stepped over.  Smaller obstacles like tree roots and rocks proved fun to navigate, and I was faster than I’d expected.  Somewhere, I downed a salt tablet, glugged some water, and ate a second gel.  The race continued in a blur of passing and being passed by the same three or four runners, which happens in all races, and always makes me laugh.  I was surprised when someone said we were at 11.5k; it had felt like no time at all had elapsed.  It had felt easy.

That was about when we joined up with the medium course runners, who were doing 15k today.  All of a sudden my familiar running mates were swamped by new people, and I had a hard time knowing if I was on pace or not.  Would the 15k runners be going faster than the 21’s?  I didn’t know.  I could only go by effort.  That worked well until we all hit the narrow single track that climbed the hill.  I’m not sure exactly where it began to go wrong, but it was somewhere in here.

It became most obvious to me at about 18.5k.  We’d become, as I said earlier, a line of very tired snails.  Every now and then, one would bound forward like the snail in Turbo, and disappear.  I tried to be Turbo a few times, but by 19.5k, it became obvious it was going to be either me or the almost-cramped calf.

I hadn’t planned a second salt tablet or a third gel, but that’s what it came down to.  There wasn’t much distance left, but then, there wasn’t much of me left either.  After succumbing to both salt and gel, I bolted off (I say bolted; what I really mean is shuffled faster).

We were in the Arboretum by then and I reminisced on having stones thrown at me there by my young daughter (ah, fond memories), and that helped me find a tiny bit more pace.  For the fourteenth time, I passed the girl in green who was running with her boyfriend  (they’d passed me thirteen times), and I could hear people clapping at the finish.

Then I could see it, the sprint to the finish.  Around me, stronger runners flashed past. “Go for it, sprint!” I cheered them.  I was not racing them.  I had no sprint today.  What I had was slow-burning determination to get across that line in one piece.  I finished in 2:22, and I was grateful it was a new course so I couldn’t compare my time to any prior year’s result.

I was breathless and elated, and quickly found some running friends to share the joy of the moment with.  We shivered together and took photos. 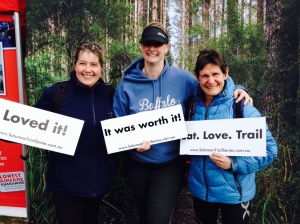 Friends at the finish line! 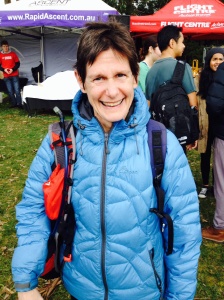 The fog had lifted and the world was full of exhausted, joyous, shell-shocked runners.  It was like a giant party in the coldest place on earth, and it mattered not that I was still sick or that I hadn’t run as fast as I would have liked.

What mattered was I’d made it to both the start and the finish line.  And I had a new gold standard for the Coldest-Race-Start-Ever to use for future mental-toughness games.

Thanks Rapid Ascent, Volunteers, fellow racers and friends.  It was a glorious day out, and strangely enough, my cold seems much better now.

9 thoughts on “Into the fog: Salomon Trail Series 2014, Olinda Race”