I was nervous.  To be honest, I was frightened.  It was nearly dusk, and I’d gone further along this trail than I’d ever gone before.  The summer crowds had thinned, and in this, the final kilometre of my outbound journey, I had seen no one at all.

Worse still, the terrain had changed dramatically, becoming a narrow single-track, bordered on both sides by scrubland, with low grass and dead-looking bushes.  It was hot.  And it was nearly dusk.

And it was snake season.

I started suddenly, jumping up in the air and to the side, with a shout of fear – a small lizard was on the track right next to me, but I had mistaken it for a snake.

I took a deep breath and coached myself to calm down.  Soon, the narrow track came to an end by a shoe-cleaning station, and I dutifully scraped down my trail runners, and studied the four-way intersection.  My way along the Surfcoast Trail was clear, but I made sure to look at it from the return direction, as several of the tracks went onto other areas, and I didn’t want to get confused.  I was carrying a phone with solid GPS, but no printed map; I would be able to find my way again if I got lost, but not as easily as with a paper map.  So I was careful on this one unfamiliar intersection.

On I went.  Towards Ironbark Basin.  It must have been named after the thin, lonely trees that had littered the trail with thin strips of bark. 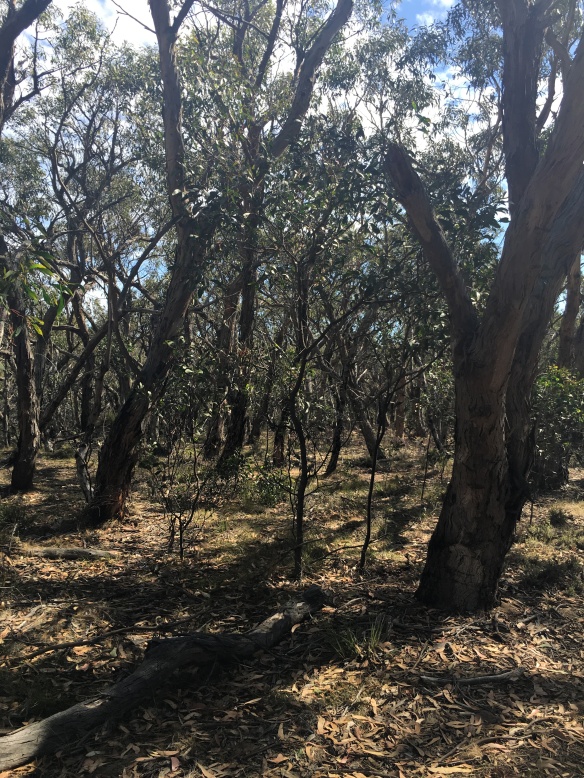 A place for snake, without doubt

They made me edgy.

I ran on.  I had only 700 metres before my planned turnaround at 12k, to make the run a 24k roundtrip.  I wasn’t going to turn back early, even if I was nervous.

I was breathing too fast.  It wasn’t just worry about snakes.  There was no one around.  I’m a New Yorker; I feel most afraid alone, where there may be people.  From the distance, I heard the sound of a group of people, celebrating.  They sounded young, and male.  I ran faster and, I hoped, more quietly.  I was really psyching myself out now.

Finally, my Garmin read the right distance, and I quickly turned back.  It was 4:45 pm, plenty of time before dark, but the light had changed.  I ran slowly, carefully, watching the earth.  I didn’t like the look of things.  In my head, I said to myself, if ever there was going to be a snake, this would be the place.  But I’d lived here for nearly eight years, and never seen one.  That’s what the rational part of me told myself, to keep myself running.

I came to the four-way intersection; I knew the way back and felt slightly better.

The good feeling disappeared as soon as I entered the single-track section (the one bordered too closely on both sides with low grass and small shrubs).  I was in shorts, a singlet, ankle socks and trail runners.  I felt decidedly vulnerable.  My pace slowed to a jog.  I had my eyes so wide open they hurt, and the slight imperfection in my vision (I’m missing a bit of vision in my left eye, and see a grey shadow where the world should be) made it worse.  Still, it was only a kilometre on this track.

That’s when I saw it.

Stretched out about eight inches onto the trail.

The long, striped back of a Tiger Snake.

I stopped in my tracks.

From my mouth came a whole string of curse words, but no one was there to hear.  I stared at the snake, studied it.  I couldn’t see its head.  It definitely had striped.  It was thick in diameter, which made me guess it could be long.  But I couldn’t see if it was curled to face the track, or positioned to slide away.

I back-tracked several steps, carefully, keeping my eyes on it.  Then I stomped on the ground, expecting the vibrations to send it fleeing into the woods.  Except it didn’t move.  I muttered my useless curse words again and considered my options.

I could try to sneak by it.  I shook my head.  It could strike me easily if I scared it. I was all alone here, and Tiger Snake bites could kill.  Though I always carry a compression bandage and have studied what to do in case of a bite, it wasn’t worth the risk.

I could back-track and try to find another trail.  But I hadn’t been here before, and I’d seen no other tracks that went back the way I wanted to go.  That meant bush-bashing and trying to get to a road.  Way too scary all alone at dusk.

I could stay right where I was.  And wait it out.

My heart was racing.  I paced back and forth, unsure of what to do, willing that snake to move.  It felt like an eternity.  The snake just stayed there.

It hadn’t occurred to me that someone else might come up the trail.

But suddenly, like a vision, a mountain-biker appeared, heading towards me.  He would have to ride by the snake to get to me, but there was no way to warn him.  I stood in the centre of the track, ten feet away from the snake, and waved him down as he got close to me.  He’d already ridden fast by the snake when he got to me.  But his face said no; he didn’t want to stop.  I saw indecision flicker there, the good-samaritan fighting with the fear of what I was going to say.  He slid to a halt, questioning me with his eyes.

He looked around with fear in his eyes.

We walked gingerly, side-by-side, away from the scary-snake side.  We didn’t speak.  When we’d covered maybe twenty feet, and not seen any snake, when I knew that we must have passed where it had been, I shouted in joy, “It’s gone, it’s gone, thank you so much!” I began running again. I was too scared to even look back at him, in case another snake appeared at my feet.

“Thank you,” I shouted again.  But I suspected he was long gone.

I still had that last kilometre of single-track to traverse alone.  Aloud I said, “if I survive this, I am never, ever, ever coming here again.”  I walked rather than ran, with my eyes wide-open, my heart in my throat.  It was the longest walk of my life.

When I finally emerged onto the wide, gravel, blessed, populated trail with the sea views and the other people, I could have cried with relief.

People were just going about their picnics and surfing, enjoying a warm Monday evening.  I wanted to tell everyone I saw what had happened.  I wanted to warn the people out walking their dogs to watch out for snakes, but realised how crazy that would make me sound.

After the snake, still with fear in my eyes.  I stopped for a photo to convince myself it was safe.

So I simply ran the 11 kilometres back to my car, with my eyes very wide open, looking out for other snakes.

It was the 4th of January.  Two Bays was less than two weeks away.

It was summer.  Bushfire-and-snake season in Australia.  I had done everything I could do to be ready for the 28k start line.

But the encounter with the Tiger Snake so close to race day left me shaken.  This was a race that was well-known for its snakes.

The clock was ticking.  I was going to have to commit, one way or another.