It was fully dark on a moonless night.  We were running on a narrow single-track in a long, thin line, the only light from our small head torches.  Suddenly, there was a bottle-neck.  I shouted to the runners behind to warn them to slow, thinking we were backing up around some technical terrain.  The next moment, shock hit me in the gut:  it wasn’t just a bottle-neck.  It was three or four men climbing up the steep bank from the river, arms linked, helping a woman who must have fallen over the edge.

I slid to a stop.  One of the man’s hands grasped at loose weeds on the edge of the trail.  I reached down and grabbed his wrist, leaning back, giving him leverage.  Another couple of runners joined in or waited around, I’m not sure which, as I was fully focused on helping the group get the woman back on solid ground.  Once, there, she sat on the edge of the trail, obviously shaken.  The group of us crowded around, asking inane questions, are you ok, can I help, can I make a call, to all of which she shook her head.  I waited a few more moments while a couple of the helpers settled her, then decided I was extraneous.  The pack of us ran on.  Phew.  That was a close call.

I was glad the woman who had remained with her had a phone; I had brought nothing with me on this night run, not even my usual crepe bandages, so I couldn’t be much use.  The group of us runners who had helped her up were unsettled.  We spoke over our shoulders in the dark as we ran, hoping she was ok. As we moved, I watched the footing carefully, and I noted aloud each time the trail seemed to drop away to the hungry river below.  Others shouted “tree root” or “look out overhead if you’re tall”.

We ran on.  The adventure continued.

It was the middle of the final race of The Trail Running Series, race 5 of 5, a 10.8 km odyssey along the banks of the Yarra River in the dark.  We had set off on this medium course event (there was a short and a longer course as well) just after eight pm.  Though I’d run this event last year, this year was different: this year, for me, was about speed.

After the starting countdown ended, I bolted.  I know my strengths and I know this course well.  We had about five-hundred meters of bitumen before the real trail began, and I wanted to get out in front.  I was mindful of my calf, which had been injured a few weeks ago, and cautious of the other runners around me, but I kept my foot down on the pace until the left turn onto trail.

The darkness engulfed us as bitumen became dirt.  The narrow beams of our head torches bobbed up and down, illuminating the rough trail, which was embedded with small rocks at random intervals.  Without caution, even the best runner would trip and sprain an ankle.

Soon we made our way back to the paved path over the highway on the Eastern Freeway Bridge.  I wondered what the rush-hour motorists made of our head-torches bobbing along above them, and was elated to be one of the runners and not one of the drivers.

We ran back to trail, to a loop before crossing under the freeway, but that’s a blur – I was running as fast as I possibly could, but trying to avoid obstacles with care, letting people pass me who were more confident, then bolting around them again when the path smoothed out, playing leap-frog.

Unlike most races, I couldn’t check my watch for pace or distance – taking my eyes off the trail for even a moment was impossible, so I ran blind, pacing by feel.  It felt old-school, like how I used to run in the days before GPS watches.

One of my friends was running nearby as we crossed under the bridge, and I worried for her pace, knowing the rocks and holes that hid in this section.  She tripped, righted herself, then disappeared into the dark – she is FAST!

Before long we began to climb the steps to the pipe bridge near Fairfield Boathouse.  After my Wonderland Run in August, up is easy, so I took the steps two at a time, eased my way uphill onto the bridge, and took off.  The flat pipe bridge made for a fast pace, the metal thudding under my trail shoes.  I had open track in front of me for the first time, and I made the most of it, pushing hard until the water station at 4.5km, where I gulped a cup of water down, and raced off.

The next section I knew was tough.  Technical, rocky, single-track that wound it’s way along just above the river.  In the daylight, it’s obvious how dangerous a stumble would be – you’d simply slide downhill through the rough trees and bushes to the river. It’s that steep.  At night, you can’t see this, so you don’t even really know it’s there.  Unless you stop and turn your head torch to look, but no one could do that without falling.  I kept my eyes forward and dodged the rocks.

It was on this section that we came across the woman who’d fallen down to the river, which inspired greater caution in many of the runners who’d witnessed it.  I kept thinking of  her as I ran.

Still, many runners passed me on this section.  I let it happen.  I’m competitive but I know my strengths.  I make way.  Trail runners are usually a polite bunch, and it all worked well.  Still, I knew that there was a road section coming; in fact, I was counting on it.  There’s this song on the radio at the moment – maybe you know it – it’s got a sassy bit of attitude: “Baby I’m sorry I’m not sorry“.  I can’t get it out of my head, especially when I run.

When we finally got to the bitumen section, I could see the ten or so runners I had made way for running along in a glowing come-hither kind of line.  I began to pick them off, one by one.

When this wasn’t good enough, I moved off the sidewalk and onto the road, and ran as fast as I dared, passing three or four at a fast clip, then a few more, and a few more still, until I riskily leapt my way back onto the footpath with a jump that could’ve taken me out but didn’t.  I sang the song running through my head (baby I’m sorry I’m not sorry…) as I passed each runner.  A runner’s giggle, I knew; they’d take back the terrain on the next rough section, but I enjoyed those moments.

We soon descended back onto real trail.

Back to full darkness.  I became leader of a group of four or five runners who didn’t want to pass me.  We warned each other about hazards, chatting breathlessly.  It was difficult being in the lead.  I had to keep my eyes focused on the trail to not trip, while quickly scanning for ribbons and arrows to make sure we stayed on course.  I didn’t want to lead the group of us the wrong way and felt the weight of this responsibility even as I ran my heart out.

Leading a group of runners home

My watch beeped but I had no idea how many kilometres we’d run.  I knew from the course we were close to the finish so kept pushing the pace, coaching myself not to get overconfident.  Cameras flashed, race photographers surprising candid expressions from all of us.

Then I could hear the sound of music and cheering and saw the cones and grass that led to the finish.  I raced for them, feeling the swish as a couple of runners sprinted by me. I wasn’t racing them tonight.  I was just glorying in the doing of this crazy thing, this running 10k in the dark, and making it back in one piece. 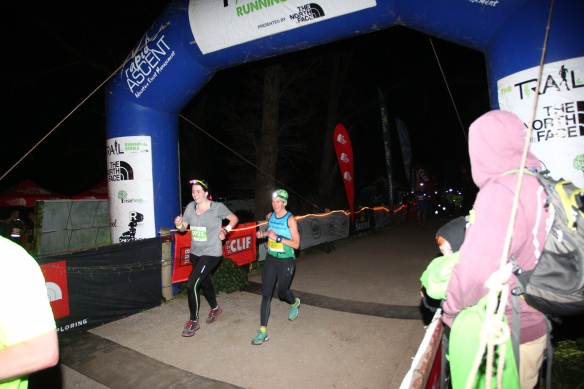 Across the finish line in 1:06, I had no idea of how I’d done.  My family found me, and I went to change clothes.  As I passed by the ambulance on the way to my car, I saw the woman who had fallen by the river being treated.  I thought to approach her and wish her well, but I didn’t want to interrupt.  I was very happy she seemed relatively unharmed.  I thought of the day I ended up in an ambulance in an adventure race on an outlying island in Hong Kong; I wanted to say it could happen to anyone.  I hope she is okay and will be back to tackle this trail again.

Once changed, I found my friend Cissy, who presented me with my Series prize – a balloon unicorn, running – the best prize I’ve ever won – and it lit up the night for me.

We sat together through the presentations in the cold night in our down jackets.  I loved the vibe of the race area in the dark, the party atmosphere, the fun of it all.  The last song before presentations, I would walk five hundred miles and I would walk five hundred more, was especially perfect, as it was my mantra during my ultra marathon phase.

Presentations started, first the Short Course, then the Medium Course.  When my age category was called (50-59), I had no idea if I’d placed.  I hadn’t even checked, as I assumed I hadn’t, being as cautious as I’d been.  Third was called – the time was slower than mine.  Second – ditto.  When my name was called for 1st in my age category, and I was so surprised and delighted and stunned, I think I was fairly glowing with happiness.  I stepped up on the highest podium to get a medal, the first time I’ve stood on the top step in this series, and shook hands with the other winners, and waited for the Series Result, where I found I’d taken out 2nd in the series in my age category.  The prize of a Trail Running Series glass and awesome Black Diamond Head Torch were wonderful, as was the gift certificate from Rise Health. 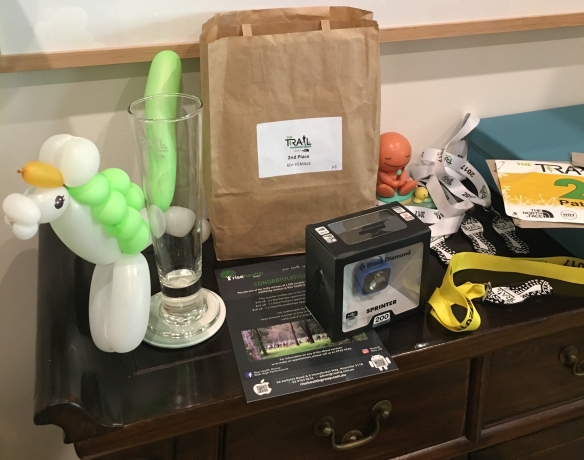 The running unicorn and other great prizes! (Ok, the bag and medal says 60+ – but I’m really in the 50-59 age category! Anyone want to swap medals?)

It is the end of The Trail Running Series for the year, and, as always, it is a bittersweet feeling.  I’ve gathered so many memories.

I flip through them in my mind: Race 1 at Westerfolds Park in June, racing my heart out to place but just falling short of the podium; Race 2 at Smith’s Gully in July and the crazy fun Rob Roy Hill Climb; August’s Race 3 at Silvan in the woods, mud and fog and tricky twisty terrific trails; Race 4 on the beach at Anglesea with the sea and the cliffs and the delight of the river crossing with September’s spring in the air, and Race 5’s night race madness at Studley Park, all aglow.

Running as fast as I can!

This could be Stonyford Road 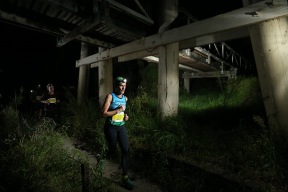 Leading a group of runners home

This series: the moments, the memories, the beauty of the trails and terrain, the friendships and music and challenge and joy.  Each year, it is a homecoming.

Thanks for the memories Rapid Ascent, and see you next year!

Next up for me: the Marysville Half-Marathon in November.  Time to get some distance and hills in these legs!

7 thoughts on “The Trail Running Series Race 5: we run the night”