I sang in my head as I drove my legs up the first real hill climb in Race 3 (long course, 21k for me) of The Trail Running Series.  My target was my close friend Andrea, who was twenty metres ahead of me.  She’d bolted past me on the technical single track a few minutes earlier.  She’s much nicer than me:  when she’d passed me, she’d said kind things, you can do it Patricia, you’ve got this, hugely supportive and welcome words.

Unlike me, pursuing her like a predator, Katy Perry’s song ringing in my ears.  I was predator, she was prey.

Though I was secretly smiling to myself:  I know I’m strong on the uphills, but I always get caught on the downs.  Andrea says she’s more reckless than me; I say she’s braver.

Most people are.  I know because all of them fly by me as I carefully pick my way along, memories of sprained ankles and face-plants echoing in my head.

So, yes, I was coming at her like a dark horse, but she’d be coming at me a few minutes later on the downhill.  Like a…I don’t know.  What’s a metaphor for someone much nicer than a dark horse?  Like a rainbow unicorn with a kind smile?  It was funny how we played cat-and-mouse-and-cat, each encouraging the other, and competing, my trail running buddy and I.

The race course?  Oh yes.  We began on single track just above the Silvan Reservoir Dam.  Easier than I recalled at first, with more visibility and less fallen trees.  I was running along, thinking, well, this isn’t so bad, enjoying the pace and the fun, wondering if I’d misremembered those tree hurdles.  Nope.  They came up eventually, but because I’d been box jumping at the gym, they didn’t seem quite as hard.  Hooray.

I was carrying a couple of injuries into this run, so was careful of foot placement.  Apparently, I had a tear in my ITB (not as easy thing to do, apparently, and it seems I must have run into the edge of something in the not so distant past), and a bit of knee tendonitis in the opposite knee (not a meniscal tear – another hooray!).  I asked the physio how to heal all this.  Rest.

Ha.  Rest.  I’m a fifty-two year-old woman with two kids, two dogs, and two cats.  I do the heavy lifting in my family.  Literally.  Rest was not going to happen.  I don’t do well on rest anyway, so I was going to be hopping and swearing a bit in this race no matter what.

To my pleasure though (or maybe because I was distracted by racing Andrea), nothing hurt.  Oh, yes, a twinge now and then, but no big deal.  Every chance I got, I bolted.  Down the smoother downhills.  Up the bigger hills.  Coaching my feet to a fast cadence, my posture to upright and looking ahead. 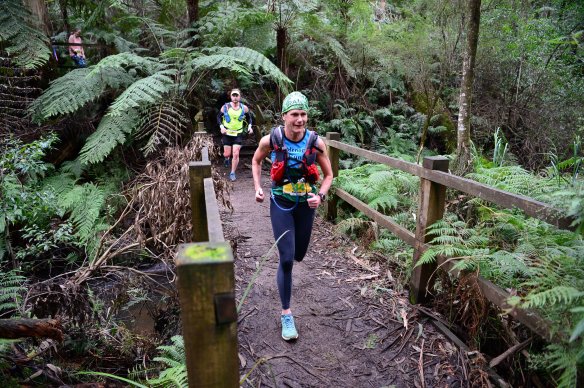 I was smiling.  It was great fun, the twisting and turning, the agility.  But then there she was again, passing me, shouting her kind encouraging words, which did push me faster but made my dark horse song seem churlish in comparison.  I didn’t really mean it, I thought.  Go Andrea, go!

I knew this run well.  Knew the up on Rifle Range Gully Track was coming and knew it was going to hurt.  Oh, it did.  I played leapfrog with a few other runners in this section, and we were all considerate and nice, making it pleasant and almost fun.

Here and there a photographer appeared and I controlled the grimace of hard effort long enough to smile, and thought with envy of the runners who could jump up into poses.  One day, maybe. 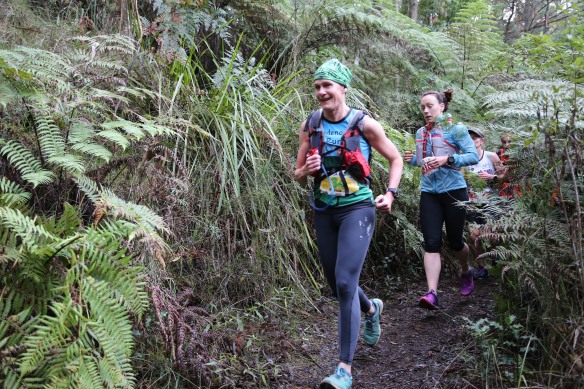 Somewhere, I passed Andrea again.  I’d made up ground steadily.  I was sure of it.  Five minutes ahead, definitely.  If I could keep that gap, maybe I’d podium today after all.  We were about 10k in.  We ran across some lovely smooth grass between unlikely trees, then we were off downhill again on Manna Gum Track, and just like that, Andrea ran in front of me again.  Glowing kindness.  Damn damn damn.  I was cramping already, so I sucked down an electrolyte capsule.  I wasn’t going to catch her.  I’d thought to hold her off until the final downhill section, where I knew she’d get me, but if she was ahead here…

I subtly readjusted my goals.  Maybe I even said it aloud?  It is no good to have the sole goal of a race to be a podium finish.  It’s too easy to finish, and be disappointed.  There’s always likely to be someone faster.  So I began to play this game:  Okay.  She’s got me beaten.  What about I go for a PB instead?  I thought I knew my PB times on this course.  It was either 2:17 or 2:22.  Let’s say 2:22.  Okay?  I’m not looking back in my records now, not at this stage. 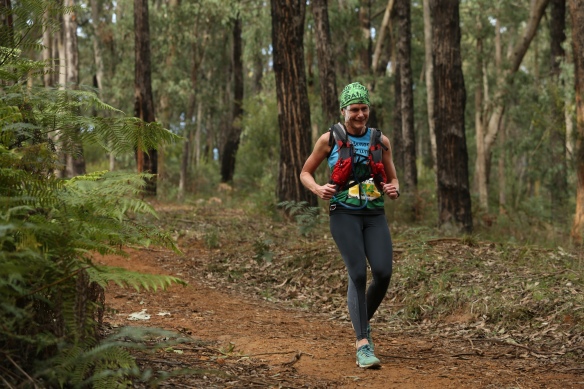 Cool.  I ran and ran, as fast as I could.  No more dark horses on this trail.  Just a horse trying not to cramp up or face-plant or feel something in my ITB go SNAP before the finish.

Hey, maybe it was getting to be time to lower the bar again?  Success equaled finishing the race and not being broken at the end.  Yes.

Was that Andrea’s blue shirt up ahead?  Nope.  That was the woman in the next age category up that I’d been trying to keep pace with.  Darn it.  They were all in front of me.

Ah well.  Another gel.  Beautiful trees.  Blue sky.  Eagle Nest Road.  I’m like an eagle.  I wrote about an eagle once in my book Akilina.  This is my road.  I’m the eagle.  Fly like an eagle…Oh my lord, my blood sugar is getting low.  I have another (my last) gel.

I know what’s coming.  Intimately.  That nasty slippy section by the road and wire fence.  The one I can never run fast on because I’m not…wait, because I’m careful. That’s the word.  Here we go.  Slip slide.  Wishing I’d worn my shoes with bigger lugs instead of these worn-down ones with more cushioning.  There’s that girl in the tights.  I pass her – hooray – I passed someone.  But moments later, she flashes by me again and disappears down the hill.  Sigh.  Keep running.  Pass a walker.  Encourage her.  The guy I’ve seen throughout the race passes me.

No problem, I think.  Stonyford Road – that’s coming and that’s my playground.

Last year, my song was I’m sorry I’m not sorry.  I sang it in my head when I passed all the people who had passed me on this section.  I rehearse it in my mind as I plan to chase this guy.  I let him go but keep him in sight.

We’re on the road now, and I slowly reel him in.  Like a fish on a loose line.  I keep watch for potholes and shift side to side but I am on him (like a darkish horse) and I manage to pass him and am just congratulating myself, when we see the volunteer who directs us to the (terrible terrible awful whose idea was this) last little bit of single track instead of letting us run down that nice smooth road.

And of course, the guy I’d just passed, well, he passes me.

I have to laugh and I run and run, knowing it’s not far, I can hear the party going on just ahead.  We pull out onto the road, run through the tiny car park, and I hear someone behind me, and say come on, let’s finish together and he says what? and I repeat myself but by then he’s caught up and begins running next to me, then puts on a sudden burst and I’m left to cross the line alone.

Alone?  No.  I hear three or four friends cheering my name and I’m so happy they are there, but I don’t look at them, because I have seen the clock and it says 2:21 and I am going to beat that 2:22 – that’s suddenly my ultimate and final race goal and I push and push and push and the clock says 2:21:31 just as I pass the arch.

Success!  Victory!  I came at my PB like a dark horse.

Though I have this sudden uneasy feeling that maybe that PB was 2:17.  Maybe.  I’m not looking.

I go to check results.  I’ve come in 6th in my age category (How?  How?  It was only Andrea and I racing!) but Andrea has come third, and a smile breaks out on my face.  Yay for my friend!

I stay for the awards ceremony and take tons of photos of all these wonderful friends, and the competition – well, it doesn’t even occur to me in those moments.  I’m simply happy to have friends, and be able to share in their joy.

It’s not until later, when another friend sends me this picture that I finally get the meaning behind this race.  It was not the race at all. It is the friendships and the woods and the camaraderie. 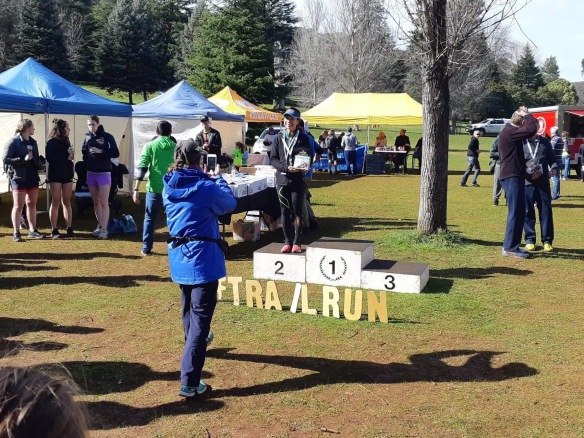 My favourite photo: my capturing Cissy on the podium!

Andrea gave me her muesli prize for my 14-year-old son, who had loved it last time.  We held it together and had a photo.  And that photo and that bag of cereal means more to me than any win ever will. 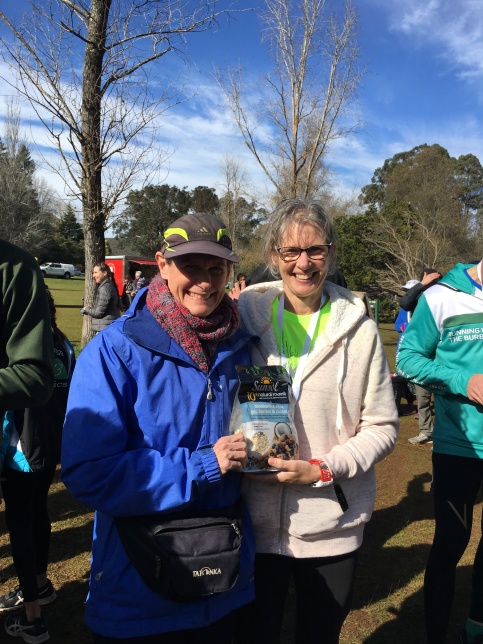 What a great race this woman ran! And she shared her muesli!