I was just trying to find a good video to reference about tripping and rolling, when I realised that my Google search was taking me places I didn’t really intend to be.  Who knew “tripping” could be used in a context other than “tripping over”?

Many trail runners might call it “face-planting” but that didn’t lead to any good images either. Just this one… 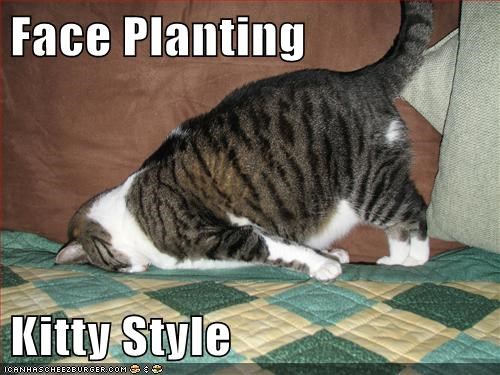 Anyhow, I’d seen a good video on how to roll onto one’s shoulder and come up standing after tripping over, so search for it if you’re brave enough.  Just watch out for the drug-users type of tripping references, which hadn’t even occurred to me.

I haven’t tried the ”trip-and-shoulder-roll” myself.  I’ve focused more on the standard “trip-over-and-smash-into-the-ground-with-your-body” technique, as demonstrated below.  Poor woman.

I’ve been trail running for more than ten years, and road running for thirty.  In that time, I’ve traveled hundreds of kilometers, seen some gorgeous places, done countless races, made some great friends, and met the ground hard with my body a total of five times.  The last time was on Friday.  In honor of that memorable moment, and because I can’t run on my sore knee this morning, I will share those memorable moments this morning, and what they’ve taught me:

1.  Face-Plant One.  It was during one of my first adventure races on Lamma Island, a small island near Hong Kong Island.  I’d traversed two kilometers of coastal rocks twice without incident, stepped off them into the sea for a short, fully-clothed swim, and run about eight kilometers.  I was on a flat section of track (flat, flat, flat) without a rock or tree root in sight.  I tripped on nothing, flew through the air and banged my (bike-helmeted) head on the ground.  No one was anywhere near me.  No injury, just scrape and bruises.  And a profound feeling of gratefulness for the bike helmets we had to wear.

2.  Face-Plant Two.  Running along the Bayside Coastal Track near Sandringham, I was contemplating my Council Rates, and wondering when they would arrive, and thinking they should have come by now.  It was near dusk.  I was alone, running on a slight downhill.  Out of nowhere, a tree root suddenly jumped up and tripped me.  Okay, that might be a slight exaggeration.  I tripped over a tree root and slammed my elbow into the ground.  Injuries: a sore right arm for a few days.

3.  Full-Body Plant.  The Roller Coaster 21 km Run 2012.  At the 13k mark.  Some of you will have read about that one already.  A superb full-body plant after I tripped over a camouflaged rock near the 13k marker.  A bloody elbow, and sore knees.

4.  Bayside Coastal Track after teaching Bodypump and 8k into a 10k run with a friend, I tripped over a step.  Gravel rash on my hands.

5.  Friday, running with a new friend.  2k into an 18k run.  We’re running on the extension of Doongalla Road, a hard, flat dirt road with a few bumps, deep in conversation.  I trip over an invisible bump.  Time slows.  First my knees hit the road, and I bounce.  Then they hit again (is this possible?).  Then my hands slide along the ground. Ouch.  That stings.  That’s what I said.  My friend said are you okay, lets walk a bit.  So we did.  Then we ran again.  We stopped at the toilets five-hundred meters away, at which point I happened to touch my knee, came away with a wet hand, and noticed I was bleeding.  A lot.  I did some First Aid with the things I always carry in my pack, and we continued on for the rest of the 18k.  Damage: a very skinned and swollen knee, on which I’m still hobbling three days later.  Oh, and gravel-rash hands.

What have I learned?  That it is much easier to fall on less technical tracks.  When focus is required, I take extra care and stay upright.  On the flat, when I’m distracted by either my own internal chatter or the wonderful company of a friend, I lose my focus, and that’s when I fall over.

Oh.  And the “telling the truth” bit: it stinks to be injured again.  I did way too much last week and forgot to look after myself.  I was tired from children’s issues and from teaching.  I lost focus.  I knew it before it happened.  I vow to take better care of myself this week.  Hence the sitting on my bottom typing instead of racing off to the gym.  I’m trying to learn when to stop and rest.  It is a hard lesson, and one, at age 48, I would really like to master.